“(…) although actually a specialist for the music from Karlheinz Stockhausen, the young clarinettist Merve Kazokoglu shone brightly with Mozart’s Concerto for Clarinet.”
Ruhrnachrichten, Karsten Mark, 24.08.2014

“(…) Now, after the sold out première from “Little Harlequin” in the Rehearsal Rooms of the Bayerische Staatsoper am Marstallplatz and guest performances in Moscow, Graz and Vienna the 31 year old proved it again: Yes, she can – and how! With her clarinet she not only played the complex musical notation but also simultaneously stamped out a rhythm with her feet, swung her hips, smiled with her eyes – and knelt with her clarinet before the listeners in the front row. (…)”

“(…) Merve Kazokoglu accomplishes the most impossible things on her clarinet, charms an incredible diversity of sounds and noises, runs, roulade and trills from her instrument and uses also the sounds of breathing, blowing, croaking – also in “Leaves and Rain”, the dialogue between clarinet and Viola (Simon Schellneger), and the young public listened intently, almost reverently. (…)” 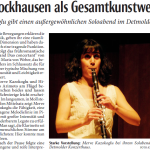 Stockhausen as a total work of art

Two works of the German Romanticism from Weber and Brahms embedded between compositions from Karlheinz Stockhausen: Merve Kazokoglu, clarinettist from Prof. Thomas Lindhorst’s class, chose an unusual but nonetheless effective programme sequence for her concert examination.

Stockhausen’s composition “In Friendship” for clarinet solo from 1977 shows in its 15 minute duration the whole spectrum of what is possible on the clarinet. With Merve Kazokoglu an artist has stepped onto the stage who interprets the piece with absolute assuredness and who, with her personality, movement and mimic, is able to fill the music with life. The body movements explain the music giving it a spacial dimension and as such have an important supporting function.

That was followed by the early romantic “Grand Duo concertant” from Carl Maria von Weber which demands, typically for Weber, an exacting blend of virtuosity and lightness, especially in the final movement. Merve Kazokoglu and Hiroko Arimoto command both of these attributes, making the difficult seem light and easy. In the slow and in minor standing middle movement, Merve Kazokoglu showed her ability in playing long phrases of melody in piano with great intensity and wonderful legato. It is said that from all instruments the clarinet resembles the human voice the most: here you could hear exactly that.

A successful and mature interpretation of the Sonate in f-minor op. 120 followed the interlude with a wide range of expression extending from virtuosity to romantic sensitivity. The theme at the beginning of the second movement was captivatingly played!

The solo piece “The Little Harlequin” from Stockhausen which involves wearing a harlequin costume and dancing a choreography of movements formed the end of the concert. Merve Kazokoglu plays the piece with grace and the fun of a real comedian. She leaves the stage, takes up a position before the organ, moves through the auditorium… A unity of music, dance, light and room is created: Musical theatre far from opera house repertoire.

Merve Kazokoglu leads an intensive dialogue with the audience which, after the last note has been played, shows its gratitude for a fascinating concert evening.